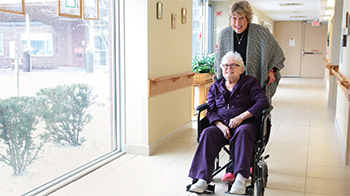 Wendie Bullen and her mother-in-law Joan enjoy the benefits of the overnight respite program at McCormick Dementia Services.

“I have been advocating for this!” exclaims Wendie Bullen of the recent pilot expansion of the overnight respite program to seven days a week. Wendie, a family member  at McCormick Dementia Services, has been bringing her mother-in-law Joan for overnight respite stays on a regular basis for the last four years and is an enthusiastic advocate of the program.

“She calls it the spa,” laughs Wendie, who shares that the program is more about giving Joan a change of scenery than taking a break herself. “She looks at it as a mini-holiday,” Wendie adds.

Joan was diagnosed with frontotemporal dementia in 2010, although memory problems had been an issue for a number of years prior. Wendie looks after Joan and her husband Art, who have been married for 60 years, and she appreciates that Joan has an opportunity to get some time to herself. According to Wendie, Joan comes back from her respite weekends refreshed and “with a smile on her face.”

Wendie enjoys caring for Joan and even had their bathroom renovated to resemble the facilities at McCormick Dementia Services to help Joan feel more comfortable and pampered.

In the spring, respite stay options were trialed to seven nights in addition to the standard two or four night stays, which include participating in the recreation programming offered by the McCormick Day Program as well as nursing support services.

Wendie’s advice for caregivers who are considering overnight respite for their loved one is to just do it. “Try it out just to get that break for a couple of days. You won’t know unless you try.”

“I think it’s the best thing going,” she says.