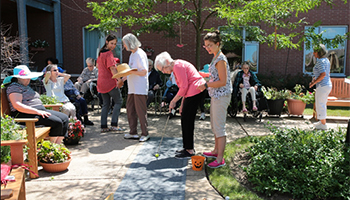 Getting your loved one involved in recreational activities can help alleviate feelings of loneliness and ease the transition to long-term care.

There is no doubt that making the decision to live in long-term care can be stressful. It’s not uncommon to hear from families who need help – help with how to tell someone that they are moving into long-term care.

This story is about Joseph, a new resident to McCormick Home. Joseph didn’t expect to be living in long-term care, and his daughter, Anne, didn’t know how to tell him that he needed to leave the home he knew and lived in for so many years.

Prior to moving in, Joseph lived at home on his own with some support from community agencies to help him with the activities of daily living. He had support from Anne as well. She would check in on him, help him get groceries and take him to his appointments. However, things started to change for Joseph. His memory was not as sharp as it once was.  He was starting to refuse the help he needed and his safety became a growing concern.

It was time to talk about moving into long-term care. Anne went on tours; however, Joseph was not interested. He thought that he could still do everything for himself and did not understand why he needed to move.

Like many family members, Anne didn’t know how she was going to convince her father that moving to long-term care was a good idea. While Anne had had this conversation many times before, because of his memory loss, Joseph had a hard time remembering the details. Eventually, the offer call came. Anne reaffirmed to her father that he would be moving to McCormick Home and that after his first week there, she would be bringing in some more of his personal items like his favorite pictures and his treasured baseball memorabilia.

Tips on Managing the Transition to Long-Term Care

As luck would have it on move-in day, Joseph was in a good place cognitively. He told Anne that he would try it. It was all Anne had to go on. When he arrived, Joseph was warmly welcomed to the Home and the transition began.

After move-in day, Anne carried tremendous guilt about putting her father into long-term care, especially knowing it was not what he wanted.  At a loss for what to do, she turned to the Home’s staff for help.

Although Joseph was pleasant with staff and enjoyed when his brother visited, he remained angry with Anne. She struggled with the idea of visiting or calling. Should she reach out?  Should she stop by?  Should she begin to bring in more of his belongings?  Almost daily, Anne called the social worker, who recommended that she start by just checking in and chatting on the phone with her dad for short periods of time. When he was angry and saying that he was just sitting in his room not doing anything, she would call the social worker to find out what his daily routine was actually like.

The social worker connected with life enrichment staff to understand Joseph’s level of engagement and reported back to Anne. Anne was happy to hear that Joseph was being invited to attend different activities around the Home and was receptive to participating.  However, he couldn’t remember details to share. And, one wonders, did he want his daughter to feel guilty about his just “sitting in the room” all day and not engaging with anyone?

Because the team knew some of Joseph’s background, the manager of life enrichment sat with him one afternoon.  They talked about Joseph’s history of volunteering at the church.  He was so excited to talk about his volunteer days and was so joyful that it seemed to be a crucial turning point for him. He and the manager connected that day, and little by little, Joseph became more comfortable living at the Home.

With coaching from the staff, Anne was able to talk to Joseph about why he was there. The staff also helped by engaging with him, getting to know him and making him feel welcome. Staff also validated his feelings of missing his home – something that is crucial to building rapport with those who especially struggle with the transition to long-term care.

Anne made it through the transition also. As her father became more and more comfortable, she was able to start coming in for visits. Their visits were short at first, but gradually became longer.  Most importantly, he started to let go of his anger toward her.

Anne expressed her thanks to the Home’s staff about three weeks after Joseph’s arrival. She made mention of his visit with the manager, when Joseph talked about his volunteering days. She said that it felt like a pivotal moment. Taking the time to acknowledge Joseph’s background and talk about his favourite pastime validated his personal feelings and his identity before he moved into long-term care.

Anne and Joseph’s story is an example of what many families commonly face when confronted with the reality of moving a loved one into long-term care. It’s important to not only work with the new resident and help them come to terms with living somewhere new, but also to help families find their way during the transition.

All staff play a part in helping residents feel welcomed and comfortable, as well as helping to understand and validate the feelings of loss or sadness that are very real for everyone involved.  Today, Joseph is thriving and comfortable. Anne visits and calls frequently. Anne likes to share that now when she visits her father, he will insist when it is time for her to leave because he has to get to the dining room for lunch.  Anne smiles when she shares that story. She smiles because she is happy.

Joanne Nancekivell is the Social Worker at McCormick Home.  Some details have been changed to protect the identity of the individuals involved.

What if the Person is Resistant to Life in Long-Term Care?