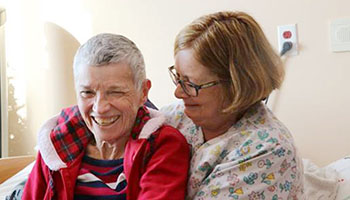 To celebrate the successes in realizing our corporate values, the McCormick Care Group Employee Values Award was established by the organization’s Quality of Work Life Action Team to recognize employees who exemplify true compassion, accountability, respect, excellence and collaboration in their day-to-day work.

The award’s first recipient is Kathy Thompson, an employee who works in the housekeeping department and who has been at McCormick Home for 23 years. Nominated for being “an amazing friend to each and every resident,” Kathy goes above and beyond in her work, including taking the time to visit with families and residents; taking residents out for walks during her breaks; and collecting, buying and mending clothing, particularly for residents who have no family to support them.  “There is never a day that goes by that Kathy does not react in some way out of the box to provide care in a way other than in a housekeeping role,” according to Angela Murray, McCormick Home’s assistant director of care, who was one of the award nominators.

“Kathy is outstanding and never hesitates to give a hand, a warm smile and a needed hug,” says Suzanne Callon of the Home’s nursing department, who also nominated Kathy for the award. “Her caring for the residents goes far beyond her job expectations.”

The Quality of Work Life Action Team developed the values award as part of the strategic initiative to make McCormick a preferred place to work.  Comprised of several dedicated staff members, the team has been involved in bringing workplace recognition to the fore. “In the past 10 months, our enthusiastic action team members took on many different appreciation and recognition projects. One of these was to initiate a new award – an award that honours an employee who exemplifies the McCormick Care Group values,” says Joanne Nancekivell, McCormick Home social worker, who co-chairs the action team with Karen Johnson, director of McCormick Dementia Services.

“I echo Kathy’s colleagues in that she exemplifies the values of the McCormick Care Group. When told she was the recipient of the award, she was honoured and very humble. She was so pleased to know that those who nominated her took the time to honour her in such a kind way,” adds Joanne.

The award presentation, which took place on January 18, 2018, at the Ritz – McCormick Care Foundation’s annual fundraising gala – included a touching video showing Kathy’s genuine kindness in her interactions with the Home’s residents.

“Thank you very much, but I am not alone,” said Kathy at the award ceremony.  “I work with many loving people, so it comes easy.”