The Enduring Gift of Music

The Enduring Gift of Music 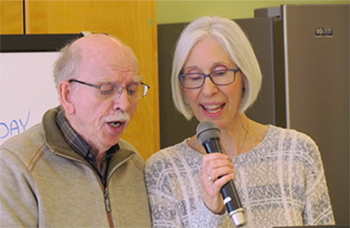 Jon Baskerville’s diagnosis of Alzheimer disease has not prevented him and his wife Barb from continuing to share their love of music with others.

The gift of music knows no bounds – not even those imposed by Alzheimer disease.  And the experience of Barb and Jon Baskerville is certainly no exception. Despite Jon’s Alzheimer diagnosis, the husband-and-wife singing duo unwaveringly continue to share their talents and love of music with others.

A former statistics professor at Western, Jon discovered a passion for singing at an early age when he joined his high school choir.  “My teacher approached me and suggested I keep performing,” says Jon, who continues to take singing lessons on a regular basis.  After meeting his future wife, Barb, at church back in 2002, they embarked on a journey to pursue their passion for music. Together, the couple began to visit long-term care and retirement homes around London, performing popular songs and Broadway favourites.

Since his diagnosis in 2014, Jon has not lost his powerful connection to music. He and Barb continued their music lessons and performances as best they could.  They then decided they wanted to learn more about the McCormick Day Program.  Upon their initial visit, Jon was drawn to the idea of joining because of the music he could hear playing behind the door. “I thought to myself, I would like to be a part of that.”  He began attending the program in January.

Barb admits that it took some time for Jon to get used to his new routine each week, but it was the music and singalongs that made him feel comfortable enough to begin performing solos in his new surroundings. “Now Jon is so happy after his day at the program,” says Barb.  “It’s a real ego boost and a motivator as well.”

According to Jon, the group of friends he enjoys spending time with at the day program are often very quiet.  “We just like to drink our coffee and do our crossword puzzles. But when the music is on, that’s when we really start to socialize,” he laughs.

It wasn’t long before he and Barb got the idea to perform together at the day program, along with their pianist and close friend Eva Bettger, and they held their first performance there in April. “It was wonderful just to meet all the people Jon sees every week,” says Barb.

The performance was well-received by their audience, who danced and sang along with the music that everyone knew very well.  “We like to perform well-known hits, songs that we grew up with,” says Jon.

“It was definitely an impressive performance,” says Joanne Hipwell, day program manager at McCormick Dementia Services. “Jon and Barb are very talented. It’s clear that focusing on their music together gives them strength.”

Since Jon began attending the program, Barb has noticed an improvement in Jon’s cognitive abilities. “I can see him talking more, remembering more,” she says.  “He’s much more alert now – like his old self.  I can see the benefits of the program and how much he enjoys it.”

Jon and Barb are already planning their next performance in September. In the meantime, Jon is continuing his solos as part of the program’s music activities.  “He especially enjoys looking up a song to sing each week for the group,” says Barb.

Overall, Jon’s deep-rooted love of music compels him to continue performing, regardless of any limitations imposed by his diagnosis. “I feel that I’ve been given a gift, and I want to share it with others,” he says 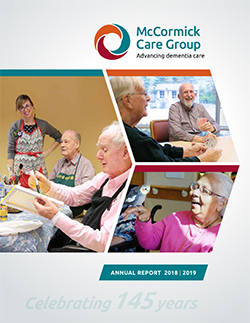