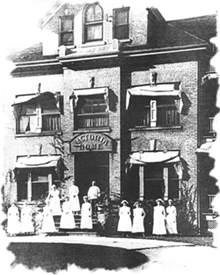 1874       The Women’s Christian Association formed for the distribution of charity, and the care of the poor and the sick.

1886       Home for Aged Women opened at the corner of King and Waterloo streets.

1892       Home for Aged Women joined with Home for Aged Men at the corner of Richmond and Victoria streets. Name changed to Aged People’s Home.

1894       Home for Incurables opened at Hamilton Road and Egerton Street.

1964       Sod-turning ceremony held for the construction of the north-east wing of the new McCormick Home.

1974       100th Anniversary of the Incorporation of the Women’s Christian Association.

1980       Parkwood Hospital accepted responsibility for the care of Veterans.

1995       The WCA receives a Women of Distinction Lifetime Achievement Award for 121 years of service from the YMCA-YWCA.

1998       McCormick Home is designated a “D” facility by the Ministry of Health Long Term Care Division, requiring a rebuild or major renovations.

2004       Sod-turning ceremony is held for the new McCormick Home.  130th Anniversary of Incorporation of the Women’s Christian Association.

2006       The new McCormick Home is completed and officially opened at the corner of Oxford Street and Kains Road.

2008       Wellspring London and Region expands to provide additional program space and improved accessibility to all programs.

2011       WCA facilitates Wellspring London and Region’s transition to a stand alone charitable organization and enters into a service agreement with the YMCA of Western Ontario.